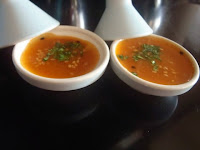 Ok, ok, I know....I am a bit Momofuku crazed at the moment, but honestly, I have a ton of cookbooks, and this is literally the first one I have read cover to cover and been fascinated by the entire concept of in a very, very long time.

Maybe it is the fact that I have it for my iPad or maybe it is just because it is an amazing book, but I can`t stop reading it and going back and flipping.

The only one who interests me as much as David Chang right now is Julia Child - another leader in the culinary world.   One spent years trying to make French cooking and technique accessible to the average American housewife, while the other breaks down cultural and technical barriers to elevate ordinary food to extraordinary levels using both standard and molecular gastronomic concepts.

There are a ton of food bloggers out there who are actually making it their mission to cook the entire Momofuku cookbook.  I can see why but there are things in that book that I just like to read about but have no interesting in making.

Like their Brick Chicken.  So...to me, brick chicken is when you cut open and butterfly a chicken and grill it with a brick on it to keep it flat on a grill.  In the Momofuku world, it is a full chicken that is boned, then reshaped and glued together with what Chang calls "meat glue" (a chemical product called Transglutaminase) and then formed into the shape of a brick, which you then deep fry and cut into pieces like a loaf cake!  Odd?  Yes!  Interesting? Yes!  Will I make it?  Absolutely not.  Maybe when they open a restaurant here I might order it, but that's as close as I will come. And he makes noodles out of things like fish purée which he cooks in a thermal immersion circulator in a sous vide method!

The below is Chang's recipe for what he calls Red Dragon Sauce.  This sauce is the perfect blend of salty, sweet, spicy and sour and makes use of a bunch of things I bought at P.A.T. in Koreatown a few weeks ago. I must admit this is one thing I love about living in Toronto....if I want to experiment with a particular type of food, then the city has a neighbourhood I can go to that always has a specialized restaurants and grocery stores that caters to the locals.  Greektown, Chinatown, Koreatown, Little Italy/Portugal, Corso Italia, Little India, Kensington Market....all are accessible by transit and are within 30 minutes.

Three of us in the house LOVE - I mean LOVE - spice.  However Justin (may have been switched at birth?? nah...) finds one drop of hotsauce too much in anything.  He gasped at this sauce, while the rest of us thought it had just a little heat.

And as you will see, I am experimenting with it in a number of different applications - as a sauce for rice cakes, as a dipping sauce for summer rolls and who knows what else.  I bet it would be awesome as a marinade for baked tofu or chicken.  This one is definitely a keeper and well worth the hunt for the ingredients.

Bring the water and sugar to a boil in a small saucepan, stirring until the sugar dissolves. Remove from the heat and let cool for a few minutes, then stir in the ssämjang to dissolve it. Stir in the soy, vinegar, and sesame and taste the sauce: no one flavor should stand out, but all should be present and accounted for. Adjust as necessary.

Email ThisBlogThis!Share to TwitterShare to FacebookShare to Pinterest
Labels: Sauces